Phuket is warm throughout the year, so if it’s just heat you’re  looking for from a tourist destination, then Phuket is unlikely to disappoint.

But it is a tropical island, after all, so rain can sometimes disrupt your itinerary no matter how warm it is outside.

Phuket’s average annual temperature is around 83°F, about the same as the Thai average. It can get as low as 77°F and as high as 95°F.  Phuket has an average of 2,500mm of rain falling each year, most of this will fall in the rainy season between May and October.

Phuket lies just 8° north of the equator, looking out westward over the Andaman Sea, so it benefits from the gentle winds blowing across the Indian Ocean which pick up considerably at some times of the year.

In fact, the seasons are determined by the winds, known as the tropical monsoon, which blow in from the northeast for some of the year and then up from the southwest for the rest of the year.

This change of direction is normally down to how heat comes off the sea and the land which also changes pressure patterns which gives the region the wet and dry season phenomenon.

The sea is warmer than the land during November through to April, which changes the wind direction. This brings in better weather from the Asian land mass, meaning less humidity, less heat and a much drier breeze.

As the great land mass of Asia heats up and the sea cools, the wind direction changes again between May to October. This brings humidity and the warm moist air to Phuket from the Indian Ocean and means higher temperatures and a great deal more rain.

The Absolute Best Time to Visit Phuket in 2019

A Guide for Phuket Weather Month by Month

It is estimated that these changes in temperatures between land and sea have been occurring in a similar way regularly in this manner for the last 13 million years.

So, for anyone booking a holiday to Phuket, following when the monsoon winds blow is a fairly decent indicator of the weather to expect when deciding on what dates to travel.

It is never an exact science, and you couldn’t set your timepiece by it, but generally you can avoid the worst time of the years and increase the chances of a successful Phuket vacation. 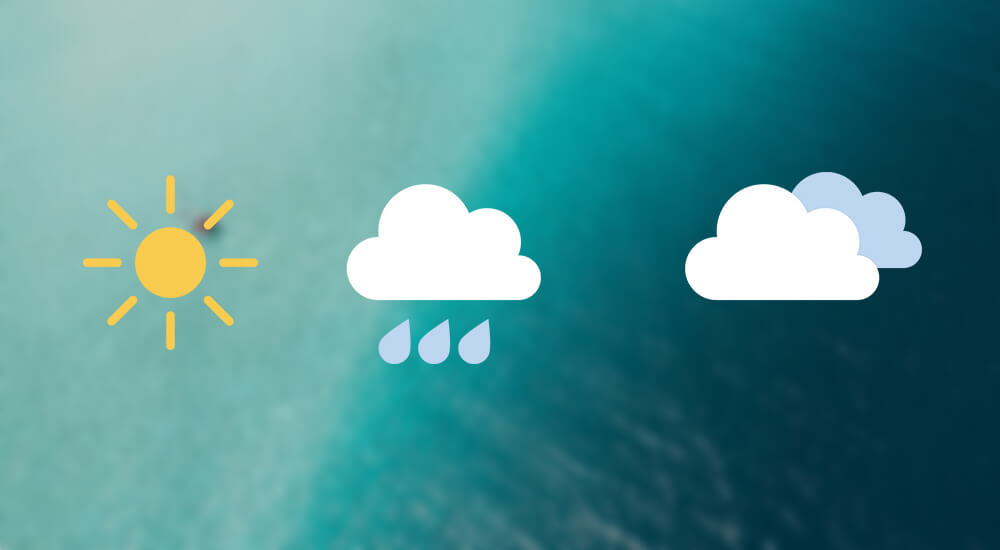 Some meteorologists might view the March to May period a separate season in Phuket because this is when heat picks up considerably. This is in contrast to June to October, which tends to be a cooler time of the year.

Most residents of Phuket would simply split the year up into two seasons, the high season and the low/rainy season (now often also called the green season), which also reflects the change in monsoon winds.

The high season is simply the period in which we see more blue sky, calmer seas and less rain. This falls between November and May. Everything else could be considered the rainy season because it barely goes a few days without raining, even if this occurs mainly at night.

The first full moon in November although also known for the Loi Kratong festival, is also generally considered to be the start of the high season, and the warm dry air returns for the busy holiday season (Christmas and New Years are peak season).

This is the start of by far the most pleasant time of the year for most tourists.

Humidity tends to drop off during the drier months between December and May, and the ever-present sea breezes make the island extremely pleasant on most days during this period.

Phuket’s has some amazing beaches. The calm seas of the high season not only look wonderful, with crystal clear azure waters, but also make for better and safer swimming and watersports.

Holiday makers can snorkel, laze in the sun and even try their hand at parasailing or jet skis. Scuba diving trips are available everywhere.

There are also a number of stunningly beautiful hidden beaches in Phuket. Most of these are unknown to most travelers and tourists but they are all worth checking out.

The calmer seas also make this time of year ideal for exploring other islands, and trips can be made across the whole of Phang Nga Bay, across to Phi Phi, Krabi or Koh Lanta or even up the Andaman Sea Coast to the Surin or Similan Islands.

Every few years, Phuket has an extremely dry high season with just a little rain, for as much as five months. The landscape changes dramatically during these years with mountain and roadside grass burned yellow, considerably different to the greenery normally associated with the tropics.

The Rainy or Green or Low Season

The rainy season begins in earnest in May, which has the third highest rainfall (around 282mm).

You can expect plenty of rain in the low season, some flooding and lots of lightning and thunder, especially in the months of August, September and October. Sometimes the rain seems to go on forever and simply refuses to stop. September tends to be the rainiest month of the year, averaging around 400mm.

Beach goers may head indoors during the rainier months, but the change in winds creates the perfect conditions for surfers, so the west coast is usually full of surf boards from April or May through to calmer seas of November or December.

The seas are too rough to go fishing for the gentle minded, and trips to Phi Phi are sometimes cancelled.

The occasional rescue takes place by the Thai Royal Navy to take stranded tourists safely back to the mainland from the islands or collapsed boats after encountering high waves and rough seas.

A word of warning for beach goers, the seas are dangerous in the low season and there might not be lifeguards on hand to warn people of the dangers.

The undercurrents and riptides are extremely strong and can drag an unsuspecting swimmer under. All swimmers should pay attention to the red flags on the beaches and never go beyond your depth when a red flag is close by.

The big waves may be great for surfing but they are certainly not ideal for water sports or island hopping. Dive operations must rely on the weather to function normally, and divers should know that their dive experience will never be as enjoyable as the high season, when waters are not stirred up and visibility is far superior.

The only periods which are totally unpredictable, are those periods that join the high and low seasons together.

These periods are those that lie around the shifts between the direction of the monsoon winds. They are the intervening or overlapping periods between the high and low seasons and they sometimes make for unpredictability.

At the end of the high season in April, the weather can change for the worst and then surprise everyone by changing back again to calm seas and blue sky for a few weeks before deteriorating again.

On occasion, even Loi Kratong which falls on the first full moon of November can be a wash out, and very occasionally the rain can even continue into December, albeit in a more infrequent manner.

The same applies at the end of the low season, when to the delight of holiday makers the weather can suddenly transform to blue skies and calm seas only to return to thunder and lightning again after a few days.

The best rule of thumb to follow is be prepared for anything. You’ll always experience brief wet spells as you move into the high season. But that also means some amazing dry spells throughout the rainy season.

See our articles on great things to do in Phuket:

You may also like some of our articles on the Phuket real estate market: